Alex Usher reviews the Alberta 2030: Building Skills for Jobs strategy and the related background research (217 page PDF) from McKinsey. He writes, " only one out of the six priorities concerns skills and mostly it’s about finding ways to get better employer feedback into institutions, expanding apprenticeships, and making work-integrated learning available to all." The good bit is that "Alberta will move to a system where institutions get to nominate a majority of their board members," which will give them more independence. The bad bit consists of tuition increases and undercompensated aid programs. "This just seems like the government is being parsimonious," he writes. Missing from both the report and Usher's analysis is any real sense of change as a result of covid; while the report acknowledges a significant increase (illustrated) in online learning, for example, it doesn't really appear anywhere in the plan. As Usher suggests, the plan appears like it's ten years old, and I would add that in addition to emulating Ontario's 2010 work skills plan, its innovation stategy seems to be taken from the 2010 federal government. 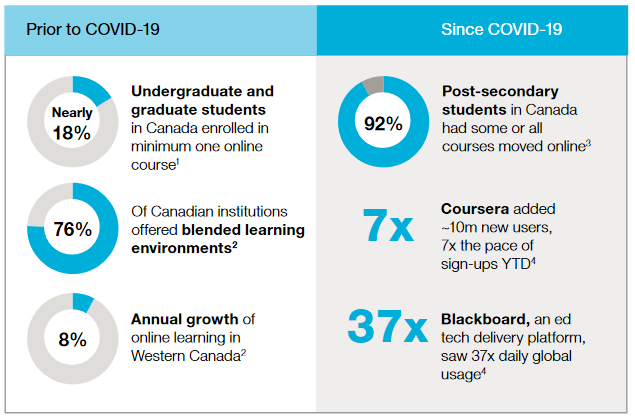