Virtual reality in K‐12 and higher education: A systematic review of the literature from 2000 to 2019

I am sure that it is a complete coincidence that this article appeared in the Journal of Computer Assisted Learning the same day that ridiculous Times Higher Education article claimed educators are doing nothing in virtual reality (VR). In fact, over the last 20 years, as this article shows, a great deal of work has been done, and the technology and the discipline continues to progress. It's worth noting that "the majority of VR interventions reviewed in the present study were still enabled by computers or projectors and characterised by low levels of immersion, interaction, and imagination." There are good reasons for this, based on issues of cost and technology. Additionally, "VR interventions had a medium effect on learning, and the factors of discipline, level of immersion, and instructional design moderated the effectiveness of VR‐based instruction," which tells us that you don't get results simply by adding VR to a class. In particular, argue the authors, "researchers should shift their attention from VR technology to VR‐based instruction with a redefined focus on the effective integration of technology and theory." 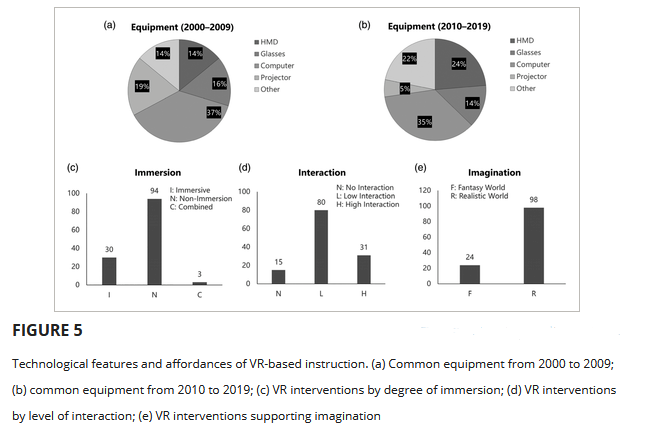