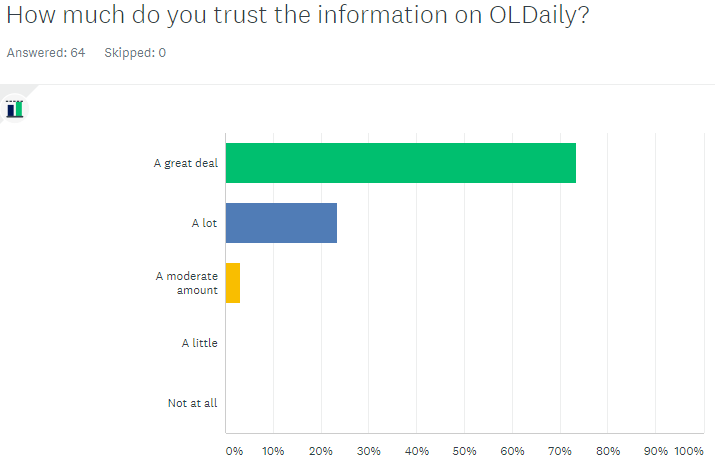 I got 64 responses to my survey, which is a response rate of 0.3 percent, which doesn't seem very high to me, but I've read refereed academic publications based on less robust statistics.

Here are the basic results: 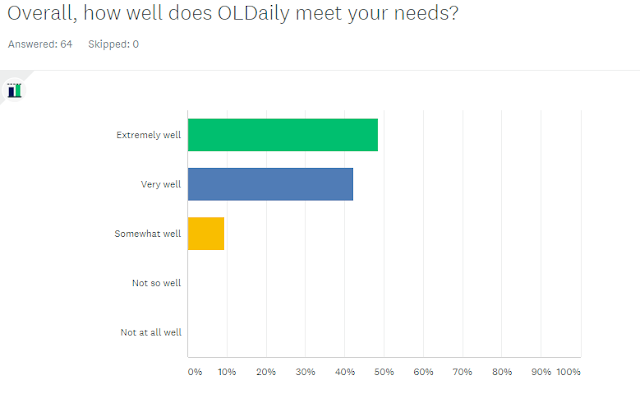 It makes sense that the existing subscribers would be those whose needs are being met by the newsletter, but it's reassuring to see it expressed in a bar graph. 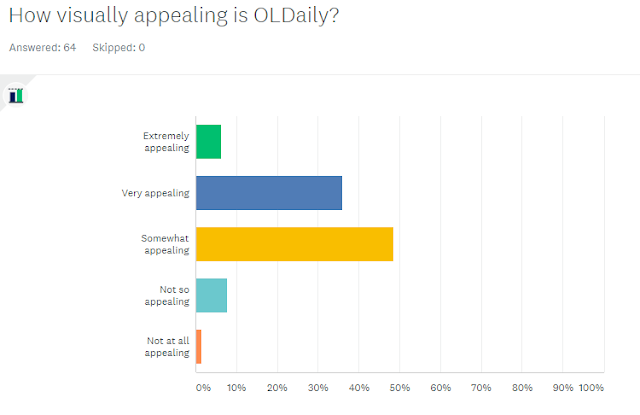 This isn't a big item for me, but it's one of the questions on the SurveyMonkey default template, and it's the first thing spammers mention ("Your blog is so well designed...") so I was a bit curious. I'm mostly not offending the eyes of people but it looks like I might need a bit of an upgrade. Just a bit though. 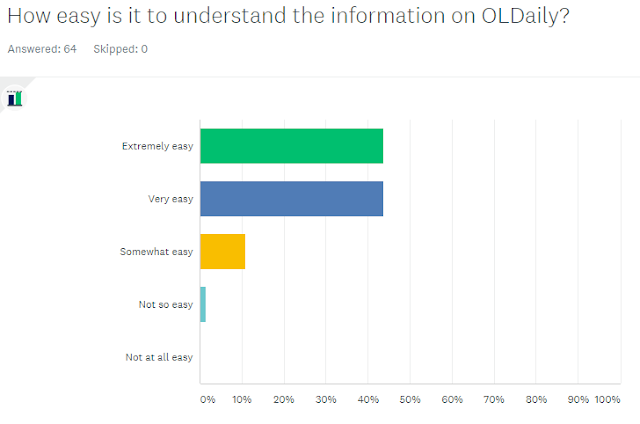 This one matters because I have two objectives: first, to make things clear, but second, to most definitely not talk down to or dilute the information on the site. It looks like I am succeeding to a degree here. 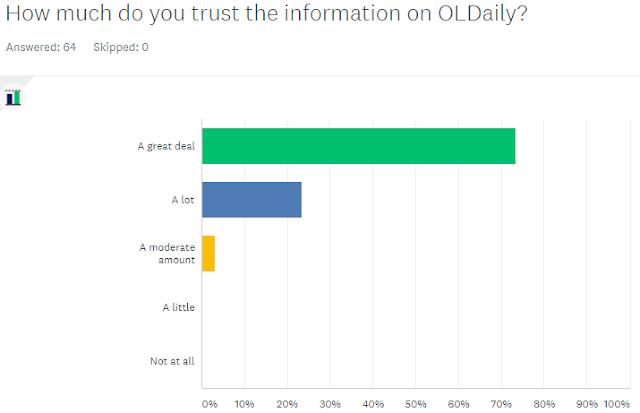 This is my top priority for readers. You don't have to agree with me. But you should be confident that I'm not lying to you, making stuff up, or pulling the wool over your eyes. Honesty has its price (I'm not nearly the most popular pundit out there) but trust is its reward. 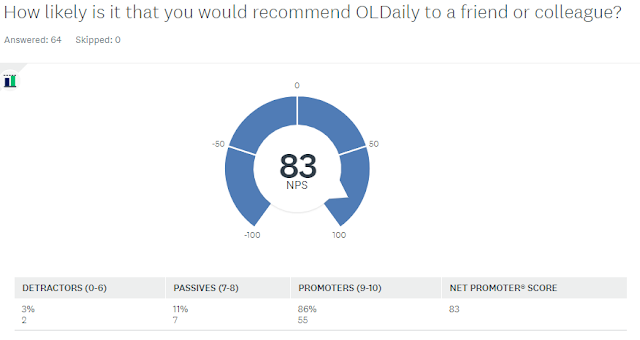 Unlike pretty much every other publication in this space I don't blast readers with subscription bubbles, prompts to "like, share and subscribe", and similarly pseudo-viral prompts. That's why I can have an 83 'net promoter' score and remain static in subscription rates.

I'm delighted to see that I have 2 detractors in my readership. Well done. Hang in there.

The next part of the survey asked how you would improve OLDaily. Many people said it was fine as it was (awww, shucks) but a number of thoughtful comments gave me pause to reflect. Let me summarize some of the common themes (where a 'theme' might actually be one person).

- Finding archives and earlier posts - perhaps create an index? Or metadata? I tried to create a page listing the names of the authors on OLDaily and had to do it by had because the page is literally too large to publish automatically. But yeah, a topic index would be useful. Matthias Melcher occasionally creates a category-based listing of my articles (and I am very guiltily aware I haven't implemented his most recent) and I'd like to implement that in the whole newsletter. But meanwhile, the search on my home page is excellent and it creates a URL for each search result, so you could easily create your own index. Maybe I could put a 'last five issues' set of links in the newsletter itself.

- Difficulties changing email addresses - the login and subscription system has always been a challenge. I wrote it myself, from scratch, partially because I'm stupid, and partially because I couldn't afford any commercial email management solution. Still can't. But yeah, I want this to be better. You don't notice, but there are also numerous bounces that defy my efforts to track down.File this under 'working on it'.

- Recognition for donations. I take the time every year (well, both previous years) to look up and respond individually to each donor, and to make sure they're recognized on the page. I have to dig into the bowels of PayPal to find the information, so I'm slow at doing this (and haven't done it yet this year, though I will).I'm also sorry about using PayPal. I was all set to switch to Patreon for this year, but then they changed their terms and I got cold feet.

- Look at the EU more closely. Yeah. I should. I do try, but so much European content is behind subscription walls or paywalls and I just won't link to that. There isn't the same prevalence of individual blogs (with English versions) in Europe as in North America. (As an aside, the place that has just dropped off the map is Australia, as that country's move toward commercialization has resulted in a nation-wide cone of silence descending on its writers (killing EdNA and FLL didn't help).

- Typos. Yeah, I know. The problem is that it's really hard for me to see them. I'm trying to create a larger-text version of my interface (or a larger screen). Also, the built-in browser spell-check doesn't work in WYSIWYG content editors (like CK Editor, which I use). I plan to test a CK Editor spell-check plug-in. It won't catch everything, but it will help. There are still issues with the Twitter feed as well.

- Sharing. Yes, posts should be easier to share (especially in OLWeekly). But I don't want to fill my newsletter with icon-sized advertisements for Twitter and Facebook. I'm thinking about it and will have something in the next year.

- Maybe allow comments? I allowed comments for many years, first with my own system, and then with Disqus. I didn't like the advertising in Disqus. I didn't like the spam in my own system. But more to the point, most of the time, nobody posted anything. That has always been true for me - maybe if I really encouraged it people might respond because they felt they had to, but where is the value in that? I never had a lot of comments, and then comments really dies with the arrival of Facebook and Twitter. Long-term, I think people should have a way to comment on their own site and reference my article (Medium tries to do this, but does it very badly).

- Make the direct link to the post I write more prominent. Right. Done. My posts now clearly show [Direct Link] and [This Post].

- Fewer blind text links in my commentary? Nope. Not changing that. You'll always know where the primary link goes, but I want the secondary links to be an act of risk and exploration.

- "I find what's published there less "deep" or "revolutionary". It may also be that less blogs are written, that some information is now more mainstream"- I thought for a while about this one. I try hard not to be mainstream and I try to be current and so some mainstream creeps in. If it's all over Twitter I probably don't need to cover it. And yet - I'm conscious that I'm also building a database and I need to include some things (that's also why I need the blind links).

- "Some pieces assume a technical expertise beyond my understanding." - yeah. That's not going to change. I try to push my own understanding with my reading and linking, and that's going to overlap onto the readers as well. My best advice is: if it isn't for you, don't read it. Nobody (except me) should read everything in OLDaily. It's not like a book, it's like a newspaper.

- (Paraphrased): "It's hard to tell whether something is a resource description or my editorial comment" - I'm conscious of that. I take great pains to try to be clear. When you're reading OLDaily, you should assume it's me speaking unless I say specifically that so-and-so said this. Sometimes I'm thinking aloud, sometimes I'm just describing something for the record. If I'm doing it right, my voice and the autrhor's voice sound like a chord; if I mess it up it's just noise.

- More focus on K-12 issues?  Yes, good point, and I should. It's hard to navigate the school-blogger scene because of the heavy self-promotion and politics in the area. Also, it's difficult to do online learning in K-12 because so much of K-12 involves supervision as well as education. But those are just excuses, and I'll make an effort.

Thanks to everyone for their feedback. I really enjoy producing OLDaily, from the server management to the software design to the research and commenting. It all comes together for me as an unparalleled research environment (one that, quite frankly, breaks all the rules of traditional research).

What do I  wish I could do to improve OLDaily?

- I wish I could focus on it full time. In the back of my mind there's some combination of Patreon and contract work and whatever that allows me to do that.

- I want to use the concept to inform my work on MOOCs and personal learning. I am engaged in an unsanctioned software redesign (working on e-learning in defiance of my management) to adapt gRSShopper to do that.

- I want to write some longer book-length pieces that pull together some of the major themes from 20 years of work. Again, there's no support whatsoever for this sort of work in my workplace. Again, a Patreon sort of thing might work - but I don't think there's enough support there to pay the actual cost of doing this.

- I want to finish and unveil the graph. Part of my theory is that the graph is already created by the interactions of people and resources, and we don't need to use AI to create it for us (we use AI to augment or inform the graph, but we choose for ourselves who we read, who we follow - not by ticking on a box, but through our actions).

I'm going to follow up this survey with a survey about the topics that are of interest to people.