Elements of a Successful Panel 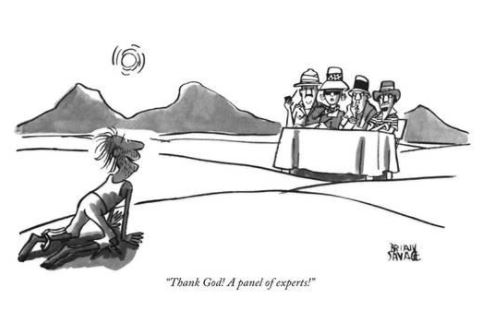 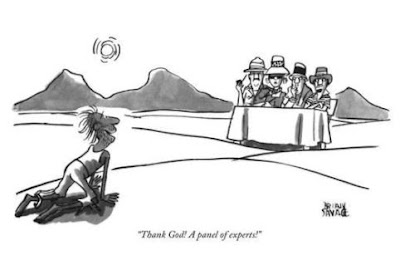 Congrats, you have an all male panel! Follow the #allmalepanel hashtag on Twitter and you'll find that there's no end to the creation of bad panels and the commentators that justifiably criticize them. The Brian Savage cartoon above from the New Yorker was around and popular back in my activist days in the 1980s. It's still relevant today.

Academic panels are often awful. It's not just their all-white all-male constitution. They are self-indulgent, inward looking, dull, pretentious and boring. Duncan Green writes, "They end up being a parade of people reading out papers, or they include terrible powerpoints crammed with too many words and illegible graphics."

There's no end either to the list of articles with tips and tools on how to organize an academic panel. They focus on everything from the role of the moderator to marketing to room organization and lighting. There's a lot of emphasis on structure and control (especially by the moderator). There are hacks and strategies, like Pecha Kucha or talking sticks.

I'm not going to add to that list. I don't think these articles are especially helpful. Not because they're wrong but because they don't get at the heart of what makes successful panels, panels where nobody wants to leave, no matter how long it runs, where it doesn't matter whether the lighting is bad or if we forget who the speakers are or if the moderator loses control.

I think there are some basic elements to successful panels. I list them, below, describe them, and more importantly, talk about why they are essential. I think these are it. Maybe I've left something out; if so, tell me. But I think that if you have these, you have success.

This is where we began this post and this gets at the heart of the purpose of a panel. What we want to see is not the presentation of a single point of view, but rather, the contrast between multiple points of view. That's actually why we have more than one speaker on the panel.

To create more than one point of view it is necessary to include more than one perspective. The problem with all-male panels or all-white panels is that the members may share some assumptions that would be contested by women or non-white panelists. People are often blind to things that are outside their own experience, so they might not see, for example, issues with things like being hit on by a TSA agent, or pulled over by a police officer.

Visible demographics may be the most obvious way panels fail to be diverse, but they aren't the only way. Academic panels are filled with - not surprisingly - academics. And academics themselves tend to share assumptions. They tend to have more stable incomes, to work in positions of authority, and to have freedom to express themselves. And though they believe they have succeeded by dint of their own efforts, they tend to rise from more affluent backgrounds and more privileged groups.

Panels within particular disciplines also tend to subscribe to assumptions common in that discipline. Moreover, organizers tend to put like commentators with like. At a recent conference, for example, on 'Canada in 2049', the professional journalists were on one panel, the student journalists on another, the historians on another, and proponents of the 'ethics of care' on another. Imagine how interesting it would have been to take one person from each group and create a panel with these four very distinct voices.

Diversity has many voices. There are many ways of being different. No single panel can encompass all of them, but the members of the panels should be different from each other, and each panel should be different from the other panels. Pick a topic and find people from completely different perspectives who might have something to say about the topic: not just the academics, but professionals in the field, students, administrators, clients, journalists, whatever.

It should go without saying that people should be free on a panel to express their own ideas and perspectives. But there are many ways panelists can be limited in their ability to participate fully, which severely limits the possibilities of the panel.

For example, spokespeople or representatives of institutions or corporations find themselves locked into their own organization's talking points. They have a specific message to convey, and it is not their own, so they are not free to diverge from it. This means that it doesn't matter what any other panelist or audience member says, their views cannot be changed. It becomes clear that any idea of such a panel being a dialogue is a pretense.

Power relationships can also impede autonomy. I've seen panels where a professor and her students are presenting. The students are constantly looking to the professor for validation. Similarly, a panel with a worker and a manager from the same company (or even the same industry) creates a possibility of reprisals or repercussions from disagreements. Even if they are at very different strata in society, panelists should be selected such that no one panelist can have power over another.

The structure of the panel itself can impede autonomy. On many panels I've attended the moderator has wanted to organize participation such that each person presents one aspect or topic within a wider subject, so the panel as a whole could be seen as a single unified whole. Doing so eliminates the possibility of real interaction because there's no possibility of disagreement: the panelists are actually talking about different things.

The purpose of a panel isn't to present or cover some body of content. It's to elicit different perspectives or points of view on some problem or issue, and to do so in such a way that the participants' understandings are informed by each others'. The reactions are just as important as the initial positions. Maybe more important. What we want to see in the panel is how each perspective shapes, and is shaped, by the others. That's a dynamic interplay that requires the ability of each panelist to adapt and to respond on the spot, which requires autonomy.

When we listen to academics talk about openness they're usually talking about whether they can access or use some sort of resource, such as 'open content', 'open source' or 'open educational resource'. But the idea of openness is much broader than that, and most fully conceived, speaks to the breaking down of barriers between the participants among each other, and the panel with the world at large.

So many panels exist as intellectual silos, four professors presenting today's version of their own are of interest or study. I've seen many panels consisting of nothing but four short stand-alone presentations. These presentations are impermeable to each other. Maybe the other panelists are listening as one talks, but more likely they're preparing their own commentary.

'Openness' in a panel means that you stop talking. It is the idea of making room for the other perspectives (and of them making room for you). Openness means converting from presentations to conversation. There aren't speaking orders, there aren't turns. The key element in a conversation isn't organization or content or subject matter, it's that each person responds to what the other person said. That means listening first.

Openness in panel discussions can also mean opening the panel to interventions from the conference participants or even an online audience. By interjecting outside input into the discussion panels can be pushed off prepared messages and talking points, and be forced to consider facts or points of view they hadn't considered. Most panels, when they include participation, do so in a question-and-answer format. But this limits the flow to a single direction.

To generate openness in a panel, the idea is to break down the barrier between audience and panel. The audience becomes, if you will, the fifth panelist. Their participation isn't an afterthought, if there's time, but something that is incorporated from the beginning.

The idea of openness also applies to perspective. It's a bit like saying "there are no dumb questions" or "there are no bad ideas" in a brainstorm. Agree or disagree, every perspective or point of view is valid (it may be wrong, but it's valid). What openness doesn't allow, by implication, is the shutting down of a person or point of view. Openness doesn't mean the same thing as 'say whatever you want'. Threats, slurs, and personal attacks are not part of the picture.

Panels are often thought of as some sort of presentation (that's actually how I classify them on my website) but in fact the presentation is the least important part of a panel. What makes a panel work is interactivity.

If the moderator of a panel does anything, it should be to encourage greater interactivity. It's not to keep panelists 'on topic' or to push the discussion to new points, it's to make sure participants don't ramble without interruption or to provide prompts should the discussion begin to lag. Where the conversation goes should be up to the panelists and the audience, and it should be the result of them listening and responding to each other, rather than planned or choreographed.

This is in keeping with the core idea of interactivity: that the outcome of the panel is something more than anyone, or even everyone, had to contribute going into it. The result of a panel is something new that didn't exist before the panel began, and it is created not by one person 'winning' an argument but by the interplay of the various points of view.

As mentioned above, the 'rule of thumb' is a crude instrument, and not all conversational transitions are equal. Though difference of opinion are encouraged, the objective of the conversation is to explore these differences rather than settling one one or another point of view as the 'right' one. Interactivity that leads to new ideas and new understandings is the most interesting; the mere repetition of the same point over and over contributes nothing.

People familiar with my writing will no doubt be familiar with these four points; they are the same elements I consider to be essential to the successful function of a learning network. Here I apply them as a case study of how to improve panel discussions. Again, as I have always asserted, these are empirical principles. In the end, it is up to the reader to observe panels for themselves and as whether panels that embrace these principles are better or worse than the alternatives.

The subtext of this post is the response to the criticisms of panels outlined in the first few paragraphs. On The Current this morning there was a segment on students protesting the lack of diversity on an all-white social inequality panel. The students are right to protest, of course. But the panel assembled by CBC was no more diverse, consisting as it did of a professor and director of the Women & Gender Studies Institute at the University of Toronto, director of the Institute for Gender and the Economy, and the acting principal of Victoria College. Academics all, speaking from a position of advantage, on how people of disadvantage are being excluded.

Sure, sometimes we want to assemble four academics to explore a topic. I doubt that the layperson's perspective on value representation in k-means clustering. But conversations, even on such obscure subjects, can be structured to that multiple points of view are relevant: what is a cluster, for example, and how do we know when we've grouped people (or puppies) the right way or the wrong way? Now it matters what non-mathematicians think.

In the aggregate, all of these elements are equally important for successful panels, and the omission of one or another in each case represents a specific sort of blindness to form and function in society.