In Defense of Cognitive Psychology

Clark Quinn responds to a recent short piece I write in response to Donald Clark's post on intelligence. In it, as Quinn summarizes, I argue "that education and cognitive psychology have put on layers of ‘cruft’ (“extraneous matter“) on top of the neural underpinnings." Quinn's defense is essentially that "the theories that have arisen have provided useful guidance for designing systems and learnings that wouldn’t have emerged from strictly neural explanations." I would respond that the proponents of cognitive psychology represent their theories as rather more than simply 'useful guidance' (otherwise they wouldn't so urgently criticize different theories). And the criticism is that cognitive psychologists extrapolate beyond the observable evidence (and not merely that they extrapolate beyond strictly neural explanations).

Clark uses Sweller's cognitive load theory, and that's a good test case. The theory essentially states that there are limitations to our ability to process information in short-term memory, and so having extraneous information impairs our ability to learn. Now it's well established that there's such a thing as sensory overload; we can experience itself and model it in simulations. But it does not follow that there is a corresponding 'cognitive overload' describable in terms of information theory. The mechanisms that are postulated in cognitive load theory - processing, storage, buffering - are extrapolations that draw on an outdated and mechanical theory of mind that is nowhere observed or confirmed except in experimental designs that presume their existence. And, as I have argued over the years, the outcome of postulating these theoretical mechanisms is bad practice, not good practice. Image: MindTools. 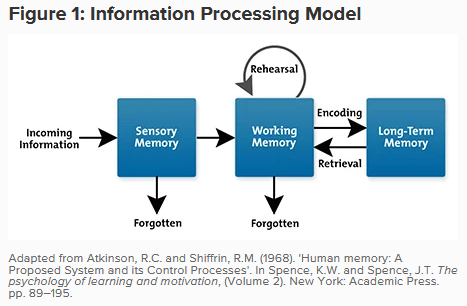