I think that Twitter is a terrible place to hold a conversation, but if you can get past how annoying these tweets would be to a non-participant you get what is actually a pretty good stream of comments in Will Thalheimer's debunk session. What are my takeways from it? Well, first of all, the numbers don't matter - what the phrase expressdes is the idea that there is a split between formal, social and espetiental forms of learning (except the numbers do matter; if it's 90% formal we're not having this debate). Also, that the numbers report activities as reported by learners, as opposed to impact on outcomes. And what would a measurement of outcomes even look like - Thalheimer seems at one point to suggest that since there's no way to evaluate the outcomes of informal learning, it doesn't exist. Finally, we find near the end of the chat a pretty good diagram using much better termionology, using education-exposure-experience instead of formal-social-informal. 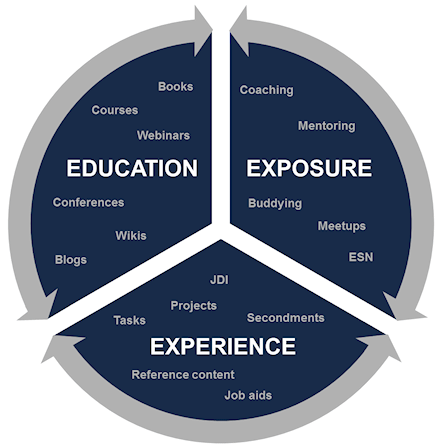