I'm following in the footgsteps of Dean Shareski, who originally posted the challenge, and Chris Kennedy, who posted a response of his own.

The idea is to identify some key events in our own professional development, some 'watershed moments', if you will.  Shareski writes, "Watershed moments are those occasions where there the lightbulb came on or something profound was shared or understood."

These are my own, and I'll use the same categories they do. 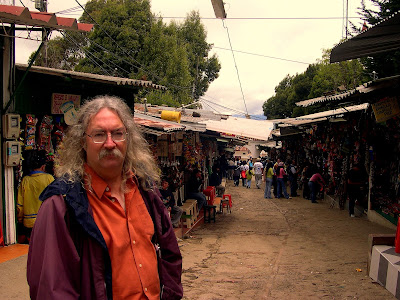 I've had a number of key events in my professional life; most of the core ideas of my own approach to education and technology have been formed while on the road. On a trip through Australia in 2004, for example, I was inspired by Olegas Truchanas in Strahan, to think of teaching as stewardship and by the Aboriginal cave drawings in Kakadu to understand that we read the world. Or for example my visit to South Africa where I encountered the cattle boys of Lesotho, or how I learned about groups and networks in New Zealand. The list goes on.

But if I had to identify one conference that was an eye-opening moment for me, it would be my visit to Bogota in July, 2006. I gave two talks, both on the subject of learning objkects and learning object repositories, at a conference titled Objetos de Aprendizaje (OA) y Redes de Alta Velocidad held at the Escuela Colombiana de Ingenieria.

It was my first time in Latin America and my first time outside the western world. I didn't learn so much about learning objects and such as I did people's attitudes towards learning and development outside my own culture. I saw a modern and technologically advanced school, met with staff and students who were knowledgeable and eager to build something better, and I saw a city and a culture ion what can only be described as a springtime for the country.

If affected me so deeply I made a movie about it, spending the next four weeks after the visit learning video editing and painstakingly piecing it bit by bit on a machine vastly underpowered for the job. It recounted not so much my experience at the conference - though it did cover that - as it did my experience in the streets, walking and talking with Diego Leal, talking about learning, seeing and feeling the powerful juxtaposition of people who have everything and people who have nothing, and how to bring them together.

As I would write later: "In 1989, the pieces came together. I watched the rise of 'people power' around the world. I had seen Francisco Varela speak on AIDS and immunology at the University of Alberta hospital. I began to see how networks, whether of individuals of cells, could take shape, form patterns, act with purpose. And how this would reshape how we understood the world."

It's hard to explain why this talk in particular had such a profound effect on me. I'm not sure there is any extant record of it , except for what might be in my own notes. The technical part of the talk was an explanation of how the immune system and the nervous system had in common the property of being a network. He was explaining how the entities in these networks communicated. And he identified a 'sweet spot' - not too many connections, not too few - that would enable optimum functionality.

I knew about connectionism by then - that was why I was in the room - and I had been working on a network theory of knowledge. This talks emphasized to me that there were ways to understand networks themselves that would be of interest, and of use, to this understanding.

But there was more to Varela than that. It's when you look deeply at a person who is presenting and you see the resonance not just of superficial theory but of a way of seeing the world. That's also what I saw that day. A few weeks later I would write my entire dissertation in just a few days sitting on the top of a hill listening to folk music.

"If everybody would agree that their current reality is A reality, and that what we essentially share is our capacity for constructing a reality, then perhaps we could all agree on a meta-agreement for computing a reality that would mean survival and dignity for everyone on the planet, rather than each group being sold on a particular way of doing things." - Varela.

I've had the privilege of reading a large number of powerful books in my lifetime. Some - like Patrick Watson's The Struggle for Democracy, Kenneth Clark's Civilisation or Carl Sagan's Cosmos - were born as TV shows. Others, though, were the classics of literature and philosophy - Tolstoy's War and Peace is probably the greatest book I've read, while Gibbon's Decline and Fall much be the most vital nonfiction, followed by Shirer's Rise and Fall of the Third Reich.

But the watershed moment for me comes with the reading of John Stuart Mill's On Liberty.

I read it in the Devonian Gardens in downtown Calgary around 1983 or 1984. The gardens are actually indoors, occupying the fourth and top floor of a downtown mall in TD Place. They were as large as a city block, fully tropical, and filled with nooks and crannies where someone could hide and read. Which is what I did. It was the beginning of a habit, for me, of reading great works of philosophy in malls and gardens.,

What Mill said two me was twofold: first, that every person has as much inherent dignity, worth and capacity as every other person, and that they are held back only by circumstances of poverty, poor education, or some other form of oppression; and second, the only defensible definition of society was one in which each person is free to pursue his or her own good, in their own way, so long as it doesn't interfere with others' rights to do the same.

Now of course the latter part of Mill's dictum has been taken on by neoliberals to justify some sort of libertarian non-society, but both parts of Mill's thesis are essential, and no view of society that treats its subjects simply as means (as Kant would say) to someone else's ends is worth defending. There is a type of freedom that Mill envisioned which is essentially one of stepping lightly through the world, redressing wrongs, and working for the betterment of oneself and one's fellows.

Public gardens, I find, are the perfect place to read enlightened philosophy.

I am tempted to write 'the computer' or 'the internet' here. But I'll be more specific.

NCSA's Mosaic was the first graphical we browser. It transformed the web from a linear text-based environment to a non-linear link-and-graphics based environment. It's hard to describe the impact of that.

Before Mosaic, I actually had my feet firmly planted in both worlds. By the time it came out in 1993 I had had several years of internet experience, building bulletin boards systems, programming multi-user games, and traversing the depths of FTP, Usenet and email. And I also had a history in graphic design, working first with wax-and-paper based layout and design, and then tools like Quark xPress, to create pages, posters and more. I had even authored a guide, Practical Graphic Design.

The resulting fusion of those technologies enabled my two greatest passions: to create, and to explore. I began building web sites almost immediately. And I began to navigate the world by hyperlink, spending thousands of hours exploring tens of thousands of websites, peering into minds and lives I never knew could possibly exist.

And I never stopped. My career today is an extension of these two passions, and if I would be said to have a research method, it is the same: to create, and to explore. Returning to a world bound by linear and physical limitations has never been an option.

Rik Hall. You may never have heard of him, but he was of fundamental importance to me.

Rik was moderator of the online WWWDEV mailing list (archives no longer extant, because who cares about history?) and chaired the NAWeb conference in Fredericton for ten years, 1995-2005. I attended seven or eight of them, often financially supported by the conference, as an unknown academic who could do workshops on interesting topics. I also managed the NAWeb Awards for a number of years, then gave it up so I could win some, and was the keynote speaker in the tenth and final year.

I remember one time when Rik was introducing me to someone else him describing me as "one of the good ones." He didn't mean 'good' in the sense of capable, skilled or qualified, but rather, 'good' in the sense of working for the betterment of others and advancement of learning. You never saw these traits more clearly than in Rik, and it was high praise that made me glow inside but also engaged me with a sense of mission.

Through Rik I met people like Terry Anderson and Rory McGreal, who were also both important influences and role models for me. He also connected me with a etwork of developers and inventors. And NAWeb was leading edge - I connected to wireless internet for the first time at NAWeb. NAWeb connected me to AusWeb (where I did my first video editing in 2001) and with a number of great people from Down Under.

Rik is a sharer, a connector, and a demonstrator. He encouraged me when I explored with RSS and content syndication, he taught me to look for and appreciate the best in the many people around the world working in education, and he linked me to a community I had hitherto not even known  existed. Like the best of them, he taught through example and not though lecture, and one of the many people he increased in life was me.