Self-Organization and the Semiotics of Evolutionary Systems

Today's new work is "eigenbehavior" (soon to be the theme of a special issue of Constructivist Foundations). The concern is derived from systems theory and based on Heinz von Foerster's idea of the eigenform. As Kauffman explains, "Heinz performs the magic trick of convincing us that the familiar objects of our existence can be seen to be nothing more than tokens for the behaviors of the organism that apparently create stable forms." To hazard a metaphor, what counts as a 'cow path' isn't the existence of a cow path, but rather the series of behaviours that led to its creation. If we didn't treat a cow path as a path, it wouldn't exist as a path. Eagle and Pentland propose "a new methodology for identifying the repeating structures underlying behavior" - the eigenbehaviors - and show how knowledge is socially constructured: "groups of friends can have their own collective ‘behavior space’ which corresponds to the common behaviors of the community."

But eigenbehavior is tied intimately to human existence; we can see the relation to Varela and autopoiesis. And as a commentator on this article about self-organization suggests: "The crux of the constructivist position: in the theory of organizationally closed systems, not all possible distinctions in some environment can be 'grasped' by the autonomous system: it can only classify those aspects of its environment/sensory-motor/cognitive interaction which result in the maintenance of some internally stable state or attractor (eigenvalue)." (p.s. lots of interesting stuff in this blog.) 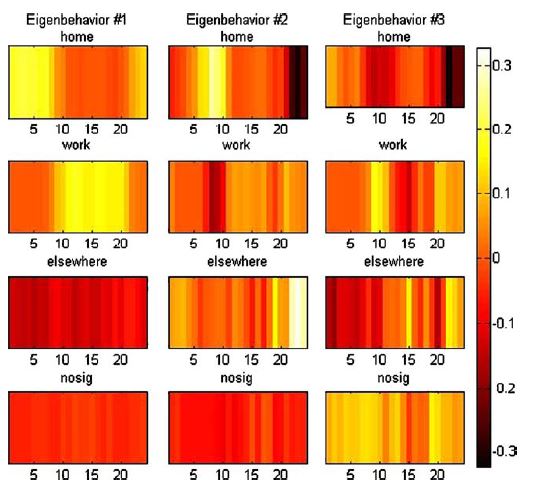