Why World of Warcraft won't let fans play their own game

This item shows the dangers of platform dependence. World of Warcraft (WoW) is a popular computer game. People buy the software, but it requires a web server to act as a platform for in-game interactions with other people. As time went by, new versions of WoW came out. Normally you could just play the older version of a game if you want, but in this case the original WoW server was shut down, making all those computer games worthless. An independent version of the server called Nostralius was set up, but the owners of WoW ordered it shut down, claiming it was piracy. So now the user have no legal way of playing their own purchased versions of the game. Sure, it's just a game. But it still represents millions of dollars of value simply obliterated because the company wants to push a new version of the software. 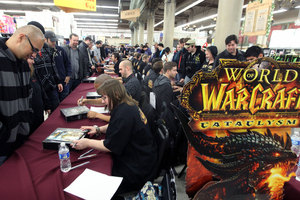