Behind the Headline: There Is No FDA For Education. Maybe There Should Be

We get this sort of sentiment a lot. It's the thinking behind initiatives like the Campbell Collaboration which postulate that innovation in education should be (more or less) completely evidence-based. So here we have "NPR’s Eric Westervelt talks with Harvard education researcher Tom Kane about how and why American education research has mostly languished in an echo chamber for much of the last half century." First of all, who cares that it's a Harvard education researcher? Second, what do they mean by "American educational research"? It's not like there's one big monolith. But most significant is the idea that "The point of education research is to identify effective interventions for closing the achievement gaps that Coleman observed and ensuring that that information is usable." Well - no. It's a ridiculous proposition, the idea that lack of access to the same education rich people have can be solved like it were a disease or illness. What do they think, that we use the education of Eton as a baseline, and if everybody gets that then we're done? I'd like to do rather better than that. 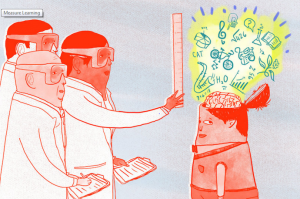