Scaling the Heights of Language, its Learning, and its Teaching 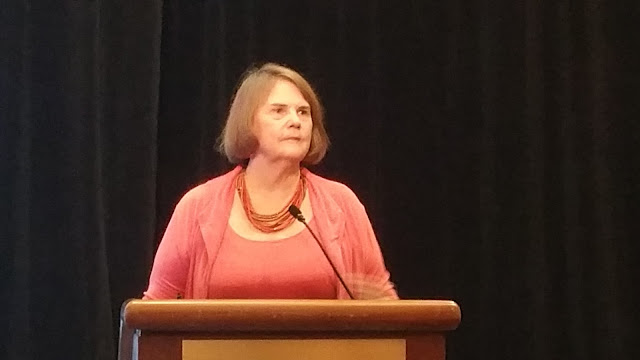 This is a summary of a talk by Diane Larsen-Freeman at TESL 2015. It was a treat to listen to. Errors and omissions are entirely my own.

This is a beautiful location - and I hear that Canadians are fond of nature. And you'll hear a lot today about econogy and nature.

Complex dynamic systems. The have captured my attention. I've been talking about it for 21 years. I will start there, but the central focus of my remarks will be about fractals.

I'm going to try to make the case than language is a fractal - and if that is true, what does that tell us about language learning and teaching?

Complexity theory - scientists seek patterns and relations within systems. Complex is not the same as complicated - an automobile is complicated, but not complex. In complex systems you have systems made up of components which interact, and give rise to patterns at other levels of complexity. The example of a murmuration is an example of complexity.

I think of language that way. The interactions of people communicating creates patterns.

The perturbation - addition of an element to a system around which organization occurs. Eg. puppies forming a pinwheel around a bowl of milk. 'Emergence' is the arising of these patterns our of a complex system.

Mandelbrot described the inability of traditional geometry to describe natural phenomena - clouds, mountains, coastlines, bark, lightning. (Photos of fractals in nature). The term is from the Latin 'fractus'.

Anuradha Matur and Dilip de Cunha were asked to devise a strategy to build resiliance in the face of rising sea levels in Norfolk, VA. They thought, think of the coastline not as a line but as discontinuous 'fingers of high ground'. They augmented the coast with similarly shaped engineered landforms.

Controlling or imposing from the top down does not work with natural systems.

Fractals are self-similar at every level of scale. If you look at the whole thing and see a certain design, as you look at each smaller piece you see the same (similar) pattern repeating.

These patterns are generated as a result of iteration. Eg. the Koch snowflake. See also the animated fractal mountain. Also, I've been told that the paintings of Jackson Pollack are fractals. Also, rhythm in nature. Christopher Joyce, Feb 21, 2012.

Fractals are modeled with differential equations - the output of one iteration becomes the input of the next. Eg. Mandelbrot set, sample zoom. Algar 2005 p. 20 - structure of patterns from the repeated applications of a single algorithm.

Nature uses fractals - they are a very efficient means of squeezing a lot of material into a small amount of space. Eg. the lungs have an enormous surface area.Eg. the brain is a fractal.

Language is n o different from other natural phenomena in that form follows functions. For example, Zipf's power law - the frequency of any word is inversely proportional to its rank in the frequency table. The most frequent word occurs twice as often as the second, which occurs twice as often as the next, and so on. Eg., in the Brown corpus, the words the, if, etc. The other half is composed of the hapax legomena - words that only occur once.

Why is this? Zipf argues for the conservation of speaker effort, which would prefer that there only be one word, contrasted with conservation of listener effort, in which each word has a specific meaning. This is a trade-off. So here is where the fractal effect is clearest. Zipf's law accounts not only for a large corpus as well as for specific writers - the 10 highest-frequency words account for 24 percent of a text (Schroder, 1995).

Zipf's law is not controversial. Fractals follow a power law as they reduce in size by a fixed ratio. See eg. the words of Tom Sawyer, Moby Dick.

Fractals emerge from dynamic processes that are recurrent. In similar fashion, patterns in language emerge from meaningful recurrent interaction among language users.

Humans are senssitive to the frequency of linguistic features they are exposed to which is reflected in their language drvelopment. So structures latent in language usage make language usable.

Second language acquisition (or development). Language processing in all domains is sensitive to frequency of usage. But exposure is not enough. Learners need to experience language as a dynamic system, molding and using it to adapt to the current situation.

But language emerges 'upwards' in the sense that innovative language-using patterns emerge from a person using the language interactively. It's a socio-cognitive process. Think of the phenomenon of 'emergence from exemplars' Eg. examples of fuzzy images of Tiananmen Square, Brandenburg Gate, Mt. Fuji, or the great Pagoda. Corinne Vionnet - compiles them from many different photos. The image, the view, etc., is 'socially negotiated' - we are around that spot, but no two people are in the same spot.

We all have our own language resources, they're overlapping, but they're ann unique as well.

Larsen-Freeman  and Cameron (2008) - the cognitive process are inextricably interwoven with their experiences in the sopcial and physical world. The context of language is socially constructed and negotiated on a moment to moment basis.

This counters the tendency to portray learner language as being an incomplete and deficient version of the native speaker language.

But is is also important that this implicit process be accompanied by explicit guidance in noticing and practicing features of the target language, especially where L1 operates differently from L2. But how can we cooperate with the natural processes as defined by nature, just as we don't want to build a wall against the rising tides?

If we think about fractal patterns, we're going to think about iterations. So how about designing activities where language-using patterns as defined by context of use, in keeping with learners' goals, are iteracted - not repeated, not the same thing, but similar.

Eg. as a model - 36 views of Mt. Fuji - under the wave off Kanagawa. Sanjurokkei.

Complex systems are built up through iterations. They encounter and use the patterns repeatedly. But not repetition. navigating the tension between convention and iteration. Eg. a text. read. Then do a cloze analysis. Remove a few words.

And teach adaptation. What is learned in one context needs to be used in another. Take what they know and (not 'transfer') transform it. How can we teach adaptation? Take their present system and mold it to a new context. Maybe Earl Stevick's idea of technemes. Change the conditions slightly for completing a task - eg. change the time allowed, etc. Same task, use the 4-3-2 technique. (Tell a story in 4 minutes, in 3  minutes, in 2 minutes - forces them to be more fluent, they extend their usage of lexical items, etc).

Also - bilinguals' languages are nit separate and complete, but create a repertoire emerging out of local practices. Use bilibgualism as a resource. We are, after all, teachers of learners, not only teachers of language. Eg: allow a student to read a text in their own language first, or provide many opportunities for low-stakes writing in any language they wish. Eg June 2015 - Juan Pelipe Herrera - mixture of english and spanish.

Also, create multilingual spaces (Helot, 2014), where students are not silences because they cannot use their L1.

And finally, assess earners' progress in a self-referential way, not against some idealized target, but looking at what the learner is doing over time.

It's not about conformity to uniformity. Through iteration and adaptation learners find the balance, and heelp all of us along the way.