Technology, teaching and productivity: the need for theory

Like Tony Bates, I agree that we should be looking to technology to improve the productivity of the educational system. Improved productivity means, on one end, lower costs for providers and lower prices for students, and at the other end, increased quality in the product or increased product for the same input. There's nothing wrong with that. Indeed, one of my major defenses of the public system is that the productivity is much better - we get much improved access, and very competitive prices. As Bates says, "The growth in post-secondary education is such that we will continue to need professors and instructors for as far as most of us can see into the future. What we should be looking at is how we can get more output from those that are in the system."

Ah, but there the problems start. As Bates asks, what is an 'output' in the educational system? A credential? We could print them out by the hundreds, so no, that's not it. Test scores? Please, no. Then, what influences outcome - is a goal of "If we do x under conditions y, we can expect z to happen" realistic? Education is not, after all, Newtonian mechanics. Finally, can we draw any meaningful conclusions from 1980s theories of educational productivity, like Walberg's "key variables that effect student outcomes?" Probably not. Minimally, what we need is a model of educational productivity, not a theory, so we can get a sense of some of the complexities involved. Ideally, we'd get a model suited to the 21st century, not something cooked up by some TQM economists, a model that weighs multiple competing interests, variable outcomes, and competing theories of value. That might be a tall order, though. 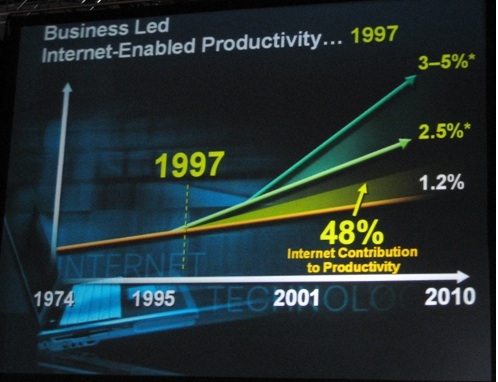