Alex Chitu, who is nornally pretty positive about Google, is experiencing a warped Catch-22 world in the land of DMCA takedowns. To begin, he received a takedown for a Blogger web page about a Greasemonkey script that allowed you to show music lyrics in the YouTube interface (pictured). The takedown (which he had to search for on Chilling Effects, they don't actually send it to him) states, "The URL listed below is one of nearly 20 song lyrics sites who have attempted to post lyrics for the song titled 'Alden Howell' by the artist Inspection 12." Fair enough, but the page doesn't post Alden Howell lyrics and the blog doesn't mention 'Alden Howell' at all, ever. So he appealed and... Google stuck by the takedown, and for good measure added threats about compliance and blocking Adsense revenue and such. This is why I run my own web server (though, you know, nobody's immune - for uttering the words 'Alden Howell' my web service provider SoftLayer could decide to go Google, or my ISP Bell-Aliant could decide to shut me down - we need some protection against this, as it's obviously being abused. Three parts: part one, part two, part three. 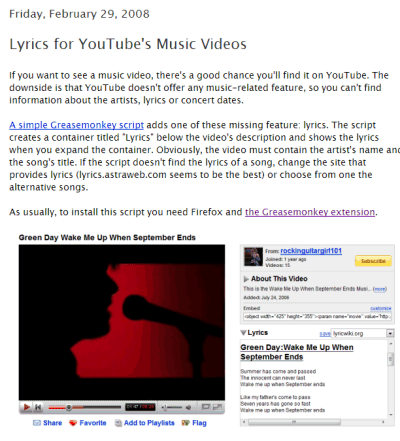