Doug Noon quotes Gerald Bracey: "First, comparing nations on average scores is a pretty silly idea. It’s like ranking runners based on average shoe size or evaluating the high school football team on the basis of how fast the average senior can run the 40-yard dash. Not much link to reality. What is likely much more important is how many high performers you have."

The reason why averages matter is that the high achievers do not live in isolation. They are supported or held back by the remainder of society, and this has an impact not only on what they can achieve but also on what their quality of life will be.

To prove this point, and to look at the data in a new light, let's consider the 'global talent pool' diagram included in Noon's post. As we can see, the U.S. has 25 percent, which Noon suggests is "a fair number of high performers, comparatively." Canada has, by contrast, 4 percent, Britain 8 percent, etc. 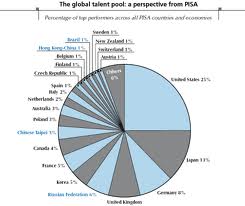 Now the thing about high performers is, they are the primary generators of wealth in a society. They innovate, create, manage, discover and teach. The rest of society, by contrast, might be characterized as the 'load' that must be carried by the high performers.

That is not to say that people who are not high performers are useless, that they don't produce wealth, or anything like that. But when we are comparing nations (as economists always do, since they are in love with league tables) it is the high achievers, not the others, that distinguish one society from another.

The size of the load will have a significant impact on the effectiveness of the high achievers. The larger the load, the more of the achievers' efforts will have to be directed toward supporting that load - by, for example, assuming teaching, public service and government positions, by paying higher taxes, by sharing more social services such as hospitals and schools.

So, how do we calculate the load? We can begin by assuming that the 'global talent pool' depicted in the diagram has some given size. It consists of some number of people. This must be true, otherwise we couldn't say that the U.S. constitutes 25 percent of it.

I don't know what the size it; the documentation doesn't say. It can't be extremely large. If it were a billion people, say, Canada's percentage would amount to 40 million people, which is greater than the whole population of Canada.

Since the comparisons are rations, it doesn't matter what the actual value is. So I will assume that the size of 'the global talent pool' is about 100 million. This is probably roughly accurate. I leave it as an exercise to construct the same argument with differing values (the results will be the same).

There are countries that are struggling. Spain, with a population of 40 million, only has about 1 million high achievers. This creates a ratio of 40 to 1, which explains why it is more difficult to prosper there, even if you are a high achiever. Still, at least it is moving in the right direction. A decade ago, we could imagine that Spain had load ratios of 80 to 1 or 120 to 1.

I could create the league table here, but we can fairly easily extrapolate the results for ourselves. By considering the load along with the percentage of high achievers, it becomes clear that American high achievers are positioned roughly as OECD data would put them.

So how does the United States manage to appear to be so much more prosperous, when its 25 million high achievers are carrying such a significant load?

Part of it is, as you suggest, volume. With 25 million high achievers, they seem to be everywhere. Major urban areas like Boston and San Francisco are full of them; the density in these areas is significantly higher.

Another major part of it is that high achievers in the United States carry less of a load than they do elsewhere. Taxes are lower, public service positions are fewer, and private schools and hospitals mean the high achievers don't have to share. 50 million people are left without health insurance, something that would be unthinkable in countries with lower load ratios. High achievers achieve a relatively higher income than those in other nations, but at the cost of a lower standard of living for those in the load.

And a third part of it is that much of the higher standard of living by American high achievers is obtained on credit. This is how Americans have satisfied the aspirations of the load, and how the nation has compensated for the increasing cost of commodities from overseas.

Eventually, high achievers in the United States will have to come to grips with the fact that they carry a larger load than their counterparts in other OECD nations, and that unlike nations currently building their economies, their relative load is *increasing*. It will become increasingly difficult, or will require increasing disparity or increasing levels of credit, to support American high achievers in their current standard of living.

Other countries are developing their economies by expanding their classes of high achievers, thus decreasing the load and improving living conditions for everyone. Americans will have to do the same, eventually - the question is, how long can their levels of increased disparity and increased credit disguise the fact that the economy as a whole is underperforming.