Tears still came to my eyes on the flight home, of course. They do that; the emotions well up from nowhere, and with them, the sadness, the hollowness. But today, on the flight home, it didn't feel the same. It was all right, and when the tears came and went I felt not sadness but something different. Happiness, even.

I think what surprised me most about our travelling unconference was the emotion it caused, not just in me but in all of the participants. Was anyone untouched? Teemu, maybe. But for the rest of us, it seemed pretty evident. We each wrestled with our own ghosts or demons or whatever.

Last night (last night? It was actually three days ago but a half-world flight, date line and lifetime have intervened to create this mirage) as we sat in a nameless tavern in the darkened and empty north side of Wellington a Maori woman came to me, straightened my collar, pulled loose some hair from under my jacket, complimented it and combed it with her fingers.

"Gisborne," she said (it came out "Gisbon" to me). "East side." She was the daughter of a Maori king there, she said, but also that it didn't matter. What mattered were her religion and her gangs. And I said later, I don't know what she did, but she made me feel more beautiful than I have felt in a long time. And we sat and spoke with the Maori princess, and as she left, she hugged me, whispered some words in my ear, and disappeared into the night. 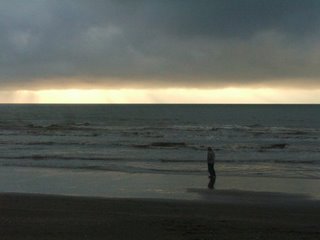 It was the Friday. It was the day we started in the Te Papa Tongarewa, the group of us, watched a parade, and then toured the city as, one by one, the members caught their flights. It was the day we three drove up the west coast of the North Island, watched the sun set over the Cook Strait, and finished with a surprisingly good supper, our conversation the compass that we explorers maybe needed to find our way.

It was one of those days. You know, one of those days when the world shelters you in its arms and finds somehow some strength to pass along to you, some goodwill you never thought it would ever grant you, some peace and contentment where you felt there would never be any. "I told you the Maori would greet me in their own way," I said later.

And they had; and I think their ancestors must have had unfinished business with one of my friends, first, before they could come to speak with me, and as the Maori princess hugged me, I thanked them for that.

We all have our demons, I think. Mine is the sadness and the lonliness felt by the little boy as he sees his closest friends betray him, the fear as he sees the group turn on him and fall upon him, the shame of running away and hiding, the knowledge that if anyone really knew, they would do the same.

That day, I realized, they wouldn't.

The next day I felt happy, a genuine happiness. I would be OK, and my friend would be OK (and I know that, with a certainty). And I found an old wooden tiki (from the 1930s, the shopkeeper said) in an antique store window, and for a ridiculously low price placed the icon in my jacket pocket. Throughout the flight home I would grip the icon with my hand, and I would know.

The tears still come and go, the emotions still sway with the wind, and even as I write this I feel old familiar voices questioning what I can feel and what I can say. But right now, none of this has any effect. Right now, as I look outside the airplane window and see the familiar hills of New Brunswick slide by, their slopes reddened by the fall foliage, I feel not sadness nor dispair but a quietude and peace I have not felt in a very long time.