A War With Denmark

So Canada and Denmark are having a dispute over an island in the Arctic.

To be specific, this one.


Here's what I wrote to a blogger from Denmark:

I think we should fight over the island.

The ownership is officially undecided (and has been since 1973) and it's almost exactly half way between Greenland and Canada (a little closer to our side, but we'll ignore that).

Both Denmark and Canada have put people (and flags, and all that) on the island to establish a claim. You say canada occupies Denmark, and when you did it our papers said Denmark invaded Canada.

Let's give the warmongers in our respective media their war...

We put a big plastic ball in the middle of the island.

Then we each take six or so of our best troops and have them wear those sumo wrestling suits. Picture here. 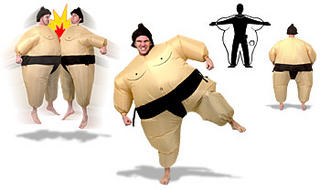 Then, each side tries to push the ball off the island - Canada will push east, and Denmark will push west.

Whoever pushes the ball into the ocean on the other side wins the island.

We'll cover the war with full media - the advertising revenue will pay for the costs of flying a crew up there.

How does that sound to you in Denmark?

Oh, d'uh, I suppose I should have looked at your blog more closely - I now realize that you're from Norway...

I suppose if I'm going to declare war, I should really address it to the right country...

Heh. Sorry about that.

I still think it's a good idea, though...