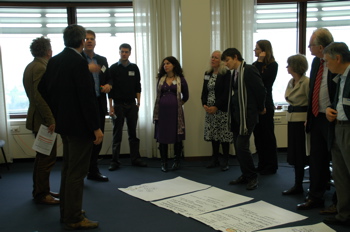 Gráinne Conole does very good work, but a conference session consisting of standing in a circle around flip-chart sheets would send me running and screaming into the nearest woods, never to be found again. So, please, let's not make that an open education practice. Also, I'm not sure I like a model where 'policy-makers' (also called 'stakeholders') are distinct from 'creators' and 'users' - people who create and use should make the policy, in my view. 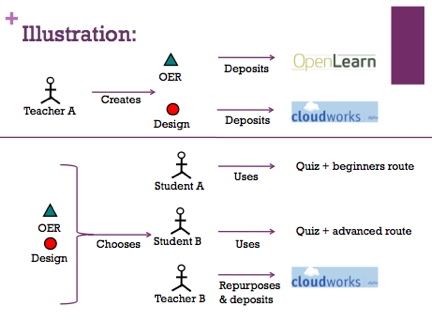 More important, I think, is the New Approaches to Defining OER paper posted a couple days ago. Don't miss it. "The focus of this paper is to present Learning Design as a potential solution and in particular to describe the work we are doing as part of the Open University Learning Design Initiative (OULDI), which is developing a suite of tools and resources to support teachers to make more effective design decisions... I argue in this paper that there is a need for new mediating artefacts to support teachers and learners in making best use of these tools and resources... These mediating artefacts can guide and support the teacher in making design decisions. They can provide mechanisms to help teachers answer questions like those posed above, to help them make decisions on which tools and resources to use and in what ways." Gráinne Conole, e4innovation.com, January 25, 2010 [Link] [Tags: Open Educational Resources, New Media] [Comment] [Tweet]

Fed Up: School Lunch Project
It's not Ed Tech but I'd hate to miss this blog by a teacher who is eating school lunches every day in 2010. Ewww. Don't they realize students need nourishment in order to learn? It looks like they've outsourced the cooking to some company that mass-produced fast food and freezes it. A year of eating that is going to turn her into a radical. Or a convalescent. Via Joanne Jacobs.
Mrs. Q, Weblog, January 25, 2010 [Link] [Tags: Schools, Web Logs] [Comment] [Tweet]

Johansen Dissertation on Sustainability of OCW Available
David Wiley says of this work, "is the first piece of empirical work I am aware of that demonstrates clearly that a distance learning program can simultaneously (1) provide a significant public good by publishing opencourseware and (2) be revenue positive while doing it." The dissertation reads like a dissertation, but it's well written, not too long, and has lots of pictures (making me think maybe I should get a PhD for this (how 'bout it David? I'll fly out there and defend it...)). Anyhow, all pettiness aside, congrats to Justin Johansen, who is full value for his newly minted degree. David Wiley, iterating toward openness, January 25, 2010 [Link] [Tags: Online Learning, Books, OpenCourseWare] [Comment] [Tweet]

Memento: Protocol-Based Time Travel for the Web
This is a really good idea - if you bookmark a page, and it changes, you retrieve an earlier version. "The Memento solution has been designed to achieve this solution. It is based on existing HTTP capabilities applied in a novel way to add the temporal dimension. The result is a framework in which archived resources can seamlessly be reached via the uniform resource identifier." The page links to a ten-minute MP3 podcast. Gerry Bayne, EDUCAUSE, January 25, 2010 [Link] [Tags: Podcasting, EDUCAUSE] [Comment] [Tweet]

Movie Made by Chimpanzees to be Broadcast on Television
If you give an infinite number of chimps video cameras, will you get Gone with the Wind? Sorry. Had to ask. More. Chris, Cynical-C Blog, January 25, 2010 [Link] [Tags: Video] [Comment] [Tweet]

Planning for sustainable and strategic impact: Creative Commons and open education
Creative Commons, in a long and convoluted post, announces they're scaling back CC Learn. You really have to filter the, um, bafflegab in this thing to get to the heart of it. "Such changes mean that some of the activities and, sadly, personnel cannot be integrated successfully with the new structure... Ahrash Bissell, the Executive Director of CC Learn, has left the organization." Note to Creative Commons: write clearly. Don't equivocate. Don't claim to be a "leader" unless you're prepared to act like one (the good kind, I mean, not the kind that hides their actions behind lawyerly fake-speak). Mike Linksvayer, Creative Commons, January 25, 2010 [Link] [Tags: none] [Comment] [Tweet]

Something fishy going on with Kindle free bestseller ebooks?
Well of course they're manipulating the marketplace and making special deals on Kindle. That's what they do. So now you get 'free' versions of (say) public domain works - but only if they're in the library of privileged publishers, and not if they're works by, say, Violet Blue. Via Amy Gahran. Ben Metcalfe, Weblog, January 25, 2010 [Link] [Tags: Books] [Comment] [Tweet]

Another Half-baked Idea (in which Scott dangerously treads on librarian toes)- OPACs, OA and Wikipedia
Scott Leslie chimes in with another of his half-baked (but totally worthwhile) ideas. "Wouldn't it be great if I could write a combined LibraryLookup/Folksonomic script that annotated wikipedia pages with subject-appropriate links to your local library catalog of books on that subject?" Or, "...with subject-appropriate links to query WorldCat instead." Scott Leslie, edtechpost, January 25, 2010 [Link] [Tags: Wikipedia, Folksonomy] [Comment] [Tweet]

Learning Styles and Work Styles
Sorry about my Twitter eruption this afternoon; if you missed it, here it is, in blog form. It began with my observation, "if there's no learning styles then there would be no working styles, just one best way to accomplish every task (which your boss knows)." It ended an hour later. Just as well; I had a meeting and people were tuning it out anyways. Twitter just isn't the venue for this sort of thing, clearly. Stephen Downes, Half an Hour, January 25, 2010 [Link] [Tags: Twitter, Learning Styles, Web Logs] [Comment] [Tweet]

Fast Forward – How Emerging Technologies is Transforming Education and Training
Contact North has released a 'challenge paper' on five major ways technology is changing learning. "Many of the implications reviewed in this paper are significant and challenging. That is the point. By reviewing emerging technologies and their potential use for post-secondary, adult and continuing education, we are looking at opportunities which could bring significant rewards to learners and those seeking to leverage learning to support the knowledge economy, if risks are managed." More papers fron Contact North. Various Authors, Contact North, January 25, 2010 [Link] [Tags: Online Learning, Ontologies] [Comment] [Tweet]

Do not open tab right next to current tab
If you just upgraded to Firefox 3.6 and don't like the new tab behaviour, here's how to fix it. The most interesting thing about the new Firefox (version 3.6) is personas. These are themes you can use to customize Firefox. Also worth noting is Mozilla's weave extension, which allows you to sync different versions of Firefox. Firefox user, Mozilla, January 25, 2010 [Link] [Tags: none] [Comment] [Tweet]

Haiti: 360°
CNN's 360 degree video camera, used to cover the Haiti crisis, is a must-see item. Leaving aside the ethics of using a crisis like Haiti to drive traffic to their video (I have also been unhappy to see some bloggers milking the crisis for page views) I have to say I am enthusiastic about the possibilities. Put one of these in front of a rock concert and let people pick their own camera angles. Put several of them over a hockey rink and let people manage their own coverage (or better, gather in groups and have DJ-like camera work). Via. Unattributed, CNN, January 25, 2010 [Link] [Tags: Video, Web Logs] [Comment] [Tweet]

Help pick the best photos, but watch out, it's addictive!
Interesting way to crowdsource a photo archive. Visitors are shown two photos of a given animal, and they pick the best. Note how this is not just a 'vote for the best photo' model. Via Simon Willison. Various Authors, WildlifeNearYou, January 25, 2010 [Link] [Tags: none] [Comment] [Tweet]