The Power of Sharing
This came up in a conversation recently, the idea that the best way to develop a business is through sharing. I had commented that scarcity and uniqueness were no longer value propositions in business. What were? Credibility, trust, and authenticity. But these cannot be assumed, or even purchased. They have to be earned, and this results only from sharing. In this video Mark Pesce looks at sharing, and the hyperintelligence that results, an increase in the intelligence of everyone that participates in it. Mark Pesce, the human network, June 10, 2009 [Link] [Tags: Video] [Comment]

Gridlock at the World Copyright Summit
Ann interesting article describing how a concept new to the copyright guardians - "gridlock" - began circulating at a recent conference of rights collection agencies. "This term was introduced by Michael Heller, a Columbia Law School professor who spoke in the morning. The word came from his book The Gridlock Economy, whose basic thesis is that too much ownership or property, including intellectual property, creates gridlock that results in underutilization of property and stunting of innovation." I think gridlock is something that developers and designers of online learning have been living with since day one - and that it is useful to have a term and a reference to use to identify this problem and trace to its roots. Bill Rosenblatt, Copyright and Technology, June 10, 2009 [Link] [Tags: Schools, Patents, Online Learning, Books, Copyrights, Patents] [Comment] 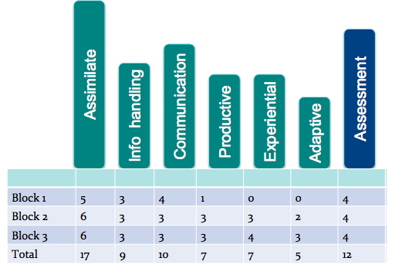 A working group at the Open University has come up with five novel ways of representing courses, all visually interesting. Grainne Conole, e4innovation.com, June 10, 2009 [Link] [Tags: none] [Comment]

The Radical Idea that Children are People
This is one of a series of essays written by students of Henry Jenkins. As Jenkins writes, the students "were asked to try their hands at integrating autobiographical perspectives into theorizing contemporary media practices." I don't think the theorizing really succeeds (and probably couldn't have succeeded). But I like this remark (characteristic of the piece) that summarizes, interestingly, the role of both books in my youth and computers in my adulthood: "That power relationship has got to go. That's what the computer really did for me: it gave me access to a space where no adult could tell me what to do. In the Harry Potter books, Harry was taking on adult roles, taking on challenges that would be difficult for grown-ups even though he was only a kid; online, I was doing the same thing." Flourish Klink, Confessions of an Aca/Fan, June 10, 2009 [Link] [Tags: none] [Comment]

Hoax Exposes Incompetence or Worse at a Bentham OA Journal
You never like to see this. A nonsense paper was submitted to The Open Information Science Journal (TOISCIJ), an Open Access journal that charges author fees. The paper was accepted and the authors asked to send in their money. The experiment casts Bentham Science Publishers in a poor light, as it appears that at the very least their peer review process is inconsistent, if not nonexistent. And, as the author points out, it raises the wider question of why authors are being charged and how the fees are being used. And, indeed, whether the it is the money itself that corrupts the system, whether or not the journal is open access.
Peter Suber, Open Access News, June 10, 2009 [Link] [Tags: Information, Open Access] [Comment]

Dark Matter, Dark Reuse, and the Irrational Zeal of a Believer
I like the level-headed way David Wiley looks at data regarding the reuse of OERs. "Rather than accepting the message of data which indicate that reuse is occurring only very infrequently, the apologists imagine an unobservable space offline in which reuse must surely be occurring." Of course, the numbers all change for different meanings of 'use'.
David Wiley, Iterating Toward Openness, June 10, 2009 [Link] [Tags: Open Educational Resources] [Comment]

Assessment and Teaching of 21st Century Skills
According to a call to action released in January at the Learning and Technology World Forum in London, there is a large gap between current assessment processes, usually involving high-stakes testing, and the skills actually taught and needed by graduates. "While people contemporary business work with others and use subject knowledge and a variety of technological tools and resources to analyze and solve complex, ill-structured problems or to create products for authentic audiences, students taking traditional exams do so without access to other people or resources and are, in the main, required to recall facts or apply simple procedures to pre-structured problems within a single school subject." The ACTS project seeks to define those skills and related assessments. Via press release. Various Authors, University of Melbourne, June 10, 2009 [Link] [Tags: Assessment, Schools, Tests and Testing, Online Learning, Project Based Learning] [Comment]

On Beginning
Ray Henderson, formerly of Angel, has started a new blog as the new president of Blackboard learn. And in an email to Blackboard customers (you can see links to his emails in the right-hand column) he stresses five priorities: product support, innovations, openness, transparency and the greater good. he is leaving the comment section in his blog open; it will be interesting to see what transpires there. Ray Henderson, Blackboard, June 10, 2009 [Link] [Tags: Blackboard Inc., Web Logs] [Comment]