GCpedia Update
If you're attempting to access GCPedia from home, I am sorry to say, it's locked behind a government firewall - something I was not able to detect while innocently accessing it from my government office. This makes it a lot less useful to me, since the whole point of a wiki isn't to write it, but rather, to have it read. Peter Smith, Spaghetti Testing, April 22, 2009 [Link] [Tags: Security Issues] [Comment] 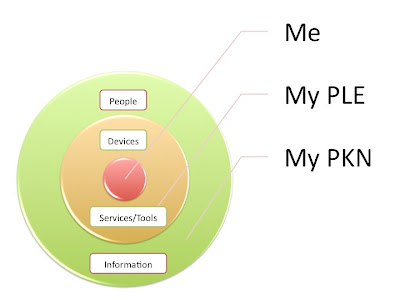 My own view is that the term 'personal learning network' is a marketing term coined by people who did not develop the concept of the personal learning enviropnment (PLE) but who wanted to make some mileage out of it. But this diagram allows everybody to play in the same park, though at the cost of narrowing and weakening the concept of the PLE. It will do for me, though. Mohamed Amine Chatti, Technology Enhanced Learning, April 22, 2009 [Link] [Tags: Networks] [Comment]

Overview of Complexity Science
This is a really nice map of what is here being called "complexity science" and features many of the writers - from Rosenblatt to Watts - that we encounter in these pages. Click the circles to (sometimes) open relevant resources. George Siemens, elearnspace, April 22, 2009 [Link] [Tags: none] [Comment]

Short URL Auto-Discovery
If you use short URLs (such as tinyurl) a lot, you may want to consider using the short URL autodiscovery specification. Robert Spychala, Website, April 22, 2009 [Link] [Tags: none] [Comment]

EduPatent Fight As Complicated As Ever
How damaging is Blackboard's decision to go the litigation route instead of innovating? Michael Feldstein's final comments here sketch the story. "Thirty-two million dollars is a lot of money in the educational technology space. It's probably about three times Desire2Learn's annual revenues and about eleven times Blackboard's annual net income. It's enough to build a new LMS from the ground up several times over." What a waste. Michael Feldstein, e-Literate, April 22, 2009 [Link] [Tags: Desire2Learn, Online Learning, Blackboard Inc.] [Comment]

Universities Will Be Irrelevant by 2020, Y. Professor Says
David Wiley hads made headlines in his local news by predicting "your universities will be irrelevant by 2020." That's certainly the trend, but could it happen so quickly? I think that by 2010 universities will be in roughly the same state newspapers are now - some will have already failed, while the business model for the rest will be shaky. But irrelevant? Not exactly - the hollow shell that is institution and tradition can march on long after the purpose and value of something has ended. Elaine Jarvik, Deseret News, April 22, 2009 [Link] [Tags: none] [Comment]

Beautiful Is Better Than Ugly
I'm kind of at a turning point with respect to programming languages. As you may know, I've been programming in Perl for the last 15 years. But development in Perl has stalled - the indifference that characterizes the ugly Perl sites listed here has now extended into the langauge itself (and note you can't even read the comments in this indifferent design). Instead of a natural progression from Perl 5 to Perl 6, we are watching the very slow unfolding of the death of the language as it fragments into the Strawberry, Rakudo, Parrot and other projects, none of which actually work yet, despite years of development. Perl has never been particularly friendly, but it always worked, and was (compared to other scripting languages) robust and fast. Now, well, Perl 6 has descrended into a pit of programmer self-indulgance, with no migration path for even experienced uisers such as myself, and no prospect of one. So, now I need to ask myself, where next? Not PHP, which is the definition of spaghetti code. Python or Ruby means committing myself to a framework (which is basically what the Perl people are trying to do). Java? Life's too short. Unattributed (or Undiscoverable), Use Perl, April 22, 2009 [Link] [Tags: Experience, Project Based Learning, Ruby] [Comment]

UK Mobile Operators Blocking Pirate Bay
The website Pirate Bay is still accessible here, but there are reports that mobile operaters in Britain are blocking access, this following the site operators' conviction of violating copyright law. The blockages are being described as "voluntrary", which raises the question of whether we want ISPs to be enacting "voluntary" blockades against sites they think ought to be banned? Like, say, Wikipedia pages? The verdict, meanwhile, has sparked outrage in the community, with activists launching DOS attacks against publisher websites; this sort of "voluntary" blockage is, of course, deemed to be illegal. Meanwhile, real pirates are being released, and of course, the flood of real crime on the internet - the scams, phishing, identity theft, spam, and more - continues unabated. Michael Geist, Website, April 22, 2009 [Link] [Tags: Great Britain, Books, Accessibility, Copyrights, Patents] [Comment]

Do Learning Styles Exist?
Another article presenting the argument against the existence - or at least the utility - of learning styles. Most of the argument revolves around our inability to measure learning styles and our inability, since there are (potentially) millions of them, to program learning for different learning styles. The author also retates Willingham's argument that the style inherent in the content (geography is inherently visual, for example) outweighs any individual learning preferences. For my own part, it seems to me that these arguments presume a particular educational paradigm, one in which learning is prepared and delivered to people, and certainly in such cases detecting, planning and adapting to individual learning styles is nearly impossible. But so much the worse, I say, for this educational paradigm. Indeed, the traditional approach's inability to deal with learning styles is an argument in favour of alternative, learner-directed, approaches in which individual learners can (intuitively) adapt their content and presentation selections to their own preferred learning modalitie, accomodating their abilities and preferences, or challenging them, as the case may be. Hugh Lafferty and Dr. Keith Burley, Website, April 22, 2009 [Link] [Tags: Online Learning, Learning Styles, Paradigm Shift] [Comment]

A Conceptual Analysis of Identity
This paper identifies three types of identity: metaphysical, occasional (ie., "social/cultural/political") and epistemological. He focuses on the latter, "properties of the person that he has and that for certain purposes he can identify himself as having to others by conveying information to them." This paper is one of an entire book of papers made available for free download under Creative Commons, Lessons from the Identity trail. Other papers from the book worth reading are this one on engineering consent and this one, a feminist analysis of cam girls. "Experiments like Jennicam allow us to revisit the potential for individual transgression in the face of powerful social constructions." Related: Leah Betancourt offers a Guide to protecting Your Online Identity. Steven Davis, Lessons from the Identity Trail, April 22, 2009 [Link] [Tags: Books] [Comment]