My original plan was to create yesterday's newsletter after arriving in Holland, but on finding out that internet access costs 18 Euros a day, and after a long trip fill with delays, I decided to get some sleep instead. Now today (Thursday) I am at a Kasteel hotel near Vaars, Holland, for this International Panel. There will be another newsletter sometime tomorrow as well. No charge! (See? There is such a thing as a free lunch.) Various Authors, ZLW-IMA, December 11, 2008 [Link] [Tags: Newsletters, Flickr] [Comment]

Teaching Taxonomy in the Age of Wikipedia
The point Rob Wall makes about taxonomies in biology could probably be made in most other disciplines as well. "Instead of starting at the Kingdom Level, I'm going to reverse things and approach the topic more paleontologically. We'll start with us Homo sapiens." And in addition, this post links to the immensely useful tree of life project. Paleontologically. What a great word. Rob Wall, Open Monologue, December 11, 2008 [Link] [Tags: Wikipedia, Project Based Learning] [Comment]

If PLEs Are Incompatible with the System Then How Do We Change the System?
Graham Attwell cites a post written by George Siemens which says, in effect, "PLEs are great. They're just completely incompatible with the existing education system." I think the word 'completely' is probably an overstatement, as we showed with our recent CCK08 online course. Nonetheless, the educational system seems either unwilling or unable to adapt to new learning modalities.

Why? Well, that's the interesting bit in this. "George quotes Evetts, Mieg, and Felt who "suggest that expertise has as a significant sociological component. Power, authority, and validity all play a role. Focus on accountability, audits, and performance targets are now heavily intertwined with professionalism. Structures of control - such as education - are not solely about knowledge and the interaction of learners with academics. Education is a system based in a sociological context. Or, more bluntly, there is 'no fundamental difference between the pursuit of knowledge and that of power.'"

That's why I say so often that we need to change how we understand power if we are to change education - and the levers of power are even more intractable than the levers of learning. Graham Attwell, Pontydysgu, December 11, 2008 [Link] [Tags: Traditional and Online Courses, Connectivism, Online Learning, Academia, Interaction] [Comment]

Controversy Over British Blocking Wikipedia Content
The first thing I thought of when I saw this item was, "Why aren't they then blocking Nirvana's Nevermind?" And in the answer we see the seed of the problem of censorship: it is never applied evenly, or fairly, or dispassionately. Bryan Alexander, Liberal Education Today, December 11, 2008 [Link] [Tags: Great Britain, Wikipedia] [Comment]

Carnary Wharf Meeting On the Future of Learning
I will be seeing Jay Cross in just a few minutes - we're both on a panel to discuss the future of learning. I imagine the discussion will be very similar to the one described by Cross here through a series of pithy quotes addressing learning in the age of the downturn. There's this quote: "The economy is going to get worse before it gets better. It's a 'phony war' at the moment, like watching a train crash in slow motion. People won't get it until they are hurting." Won't get what? Ah - that's the harder question. I need to write about that at some point, because what we need to learn is that we've reached a number of limits (limits that used to be scoffed at), limits not merely in energy and resources, but limits in corporate and political governance. See also Jay Cross on Informal Learning in Berlin. Jay Cross, Informal Learning Blog, December 11, 2008 [Link] [Tags: none] [Comment]

Is It Finally Time to Ditch PowerPoint?
The proposition, based on cognitive load theory, is that "Since people can not read and listen well at the same time, the reporter suggested, then this may mean 'the death of the PowerPoint presentation.'" This presupposes that the words in a Power Point slide are designed to be read, that is, understood as creating meaning through encoding in a grammar. But the point of words on a slide is to give the viewer something to look at, not to read. The words are better understood as signs or patterns, to aid in future recognition, not to be read for semantic content. In other words, the writing on a slide is different from the writing in a book (which would make measuring the impact of them by the same means a somewhat ridiculous exercise). Via Shareski, who highlighted this today. Gary Reynolds, Presentation Zen, December 11, 2008 [Link] [Tags: Books, Semantic Web] [Comment] 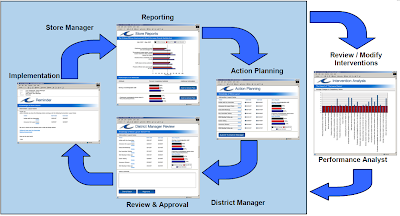 "The real beauty of a data driven model for performance improvement," writes Tony Karrer, "is that it focuses on key elements of behavior change within a proven framework. More specifically, it directs actions that align with metrics that are already understood and important. It helps ensure commitment to action." That said, I would caution that such an approach is designed specifically for a well-understood environment with clearly definable outcomes. Tying a store training initiative to sales, for example, works because (a) you know that you want 'sales' as an outcome, and (b) there is a way to effectively measure sales. Blindly applying the same methodology to less concrete domains would be a mistake, however. All of that said, Karrer's article is a well-written explanation with concrete examples and solid analysis. Tony Karrer, eLearning Technology, December 11, 2008 [Link] [Tags: none] [Comment]

Social Networking Condemned to Die. The Problem Is Commitment.
"Facebook is nothing more than a new version of America Online, with lots of calories but not much nutrition." I find it difficult not to agree with that sentiment (yet I still update my Facebook status and still check out my Scrabble Wordscraper games. "Creates a major problem for Facebook, and for other Web 2.0 social networks. Facebook has created loyalty without value, quantity that drowns quality." Yes - but the irony is that today's political laders still respond to quantity over quality, which is why we keep seeing headlines that read Government backs down after facebook protest. TonNet, education and technology, December 11, 2008 [Link] [Tags: Books, Networks, Web 2.0, Canada] [Comment]

UK Survey Shows E-Learning's the Downturn Winner
Nobody should be surprised by this turn of events, as both travel costs the drop in the price of oil has yet to be reflected in a corresponding drop in airfare) and capital shortages are motivating a trend toward online learning. Our field is not well served by a salivating response, however. Let's keep it business as usual. Clive Shepherd, Clive on Learning, December 11, 2008 [Link] [Tags: Great Britain, Online Learning] [Comment]

Academic Info
From the website: "AcademicInfo is an online education resource center with extensive subject guides and distance learning information. Our mission is to provide free, independent and accurate information and resources for prospective and current students (and other researchers)." I had a look around and can say the listings are extensive. There's a lot to browse; take a look at Medieval Philosophy (always an interest of mine) for example. Various Authors, Website, December 11, 2008 [Link] [Tags: Online Learning, Research, Academia] [Comment]